Though only a month into the 2019-20 school year, the Appalachian State University Academy at Middle Fork has been busy! Here are the top five things that happened in August and September that you should know about:

1. Test results from its first year showed significant growth at the Academy.

Following several articles published over the summer in which the Academy received praise for increasing student success (like this one from EducationNC), test results from the 2018-19 school year came back confirming this accomplishment. In September, the North Carolina Department of Public Instruction (NC DPI) released data on first-year student achievement that revealed significant growth for the Academy. The Academy's performance grade score is 40, up from last year's 30, having increased its growth 37.1% in one year. Teacher retention rates are higher with a 5% decrease in turnover from last year and an almost 11% decrease from the year prior. Overall, the Academy is meeting performance expectations.

Appalachian's Chancellor Sheri Everts noted the school's incredible improvement in a statement: "This is exceptional growth in only one year. Science, math and reading scores have improved dramatically. This impressive success is visible beyond the numbers — it is evident in the enthusiasm of the students, the passion of the teachers and the support from the administrators. I am pleased to see the data reflect the growth and achievement we've continually witnessed in these mini-Mountaineers."

After a phenomenal first year, the Academy opened for year two, starting with Open House on Thursday, August 22. Students and parents met with teachers, reunited with old friends, and prepared for the upcoming school year. The evening was full of smiles and hugs. 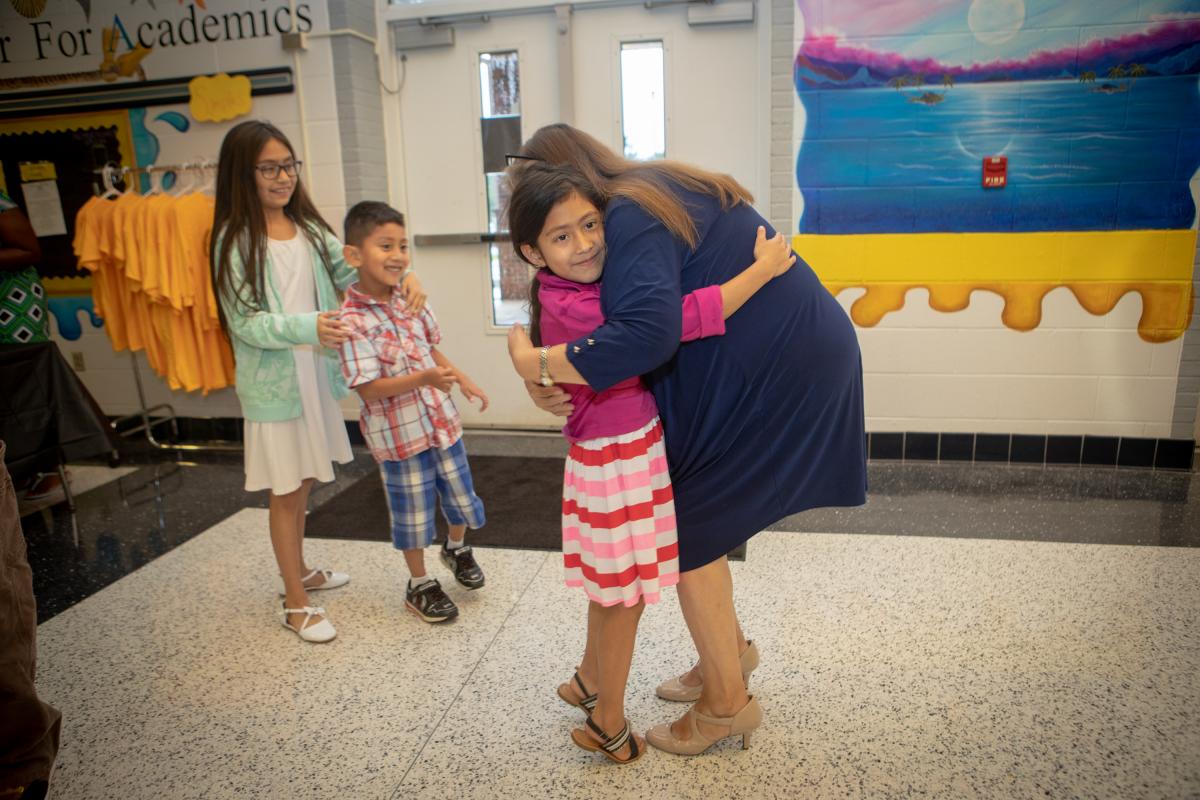 The Academy officially began its second year on Monday, August 26, continuing its partnership with Appalachian and the Reich College of Education (RCOE). The school welcomed 286 new and returning mini-Mountaineers along with 45 faculty and staff. 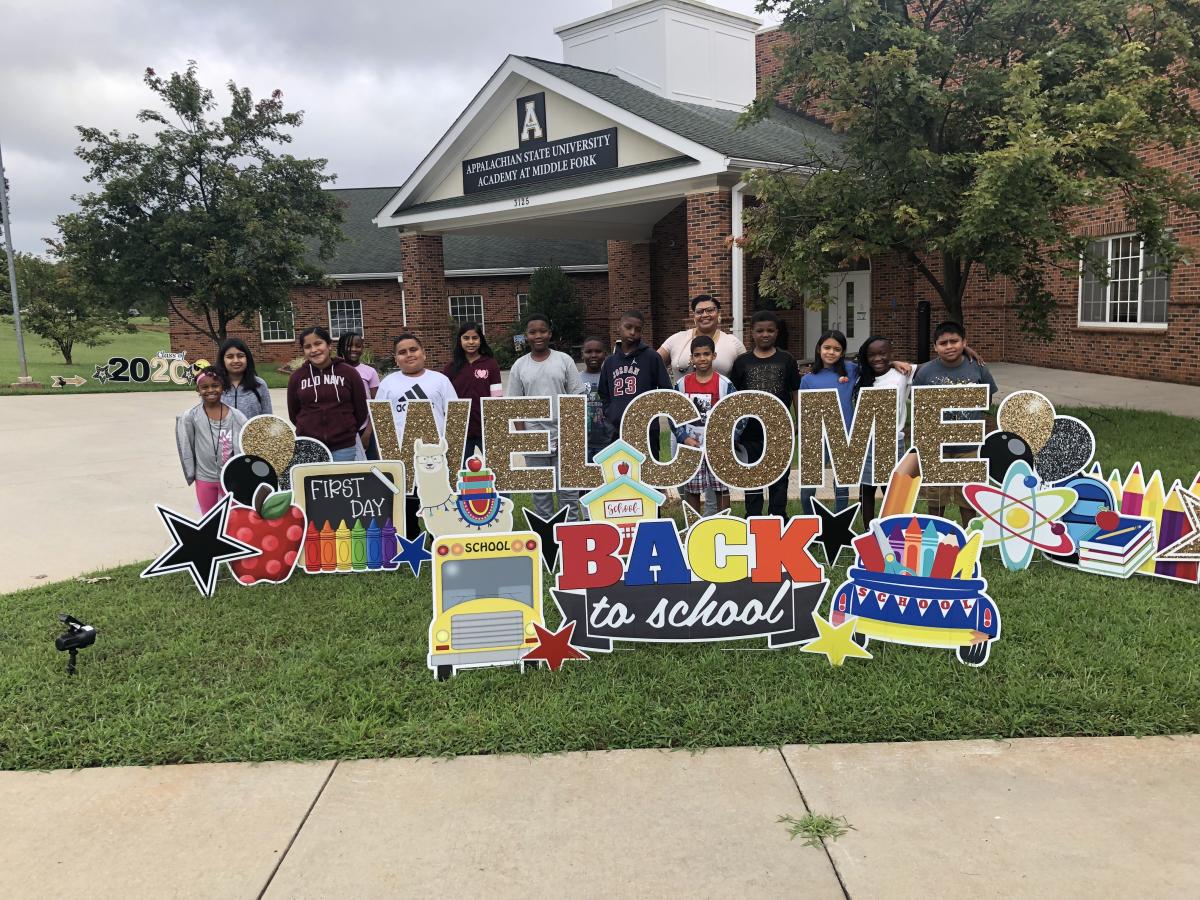 Fifth grade teacher Monique Johnson poses with her class outside the Academy on the first day of the 2019-20 school year. Photo by Amie Snow

3. The Academy's Green Team received a mini-grant to amplify sustainability.

The Green Team will use the grant to implement a zero-waste initiative and construct a greenhouse, further honoring the Academy's commitment to amplifying sustainability.

Reading can take you places - even to the "college on the mountain" for a football game!

On Saturday, September 7, the Academy's top summer readers were rewarded with tickets to the annual Education Day football game through the Mountaineer Readers initiative. Along with being recognized on the field for their accomplishments, students toured Appalachian's athletic facilities, enjoyed a tailgate that featured a cookout lunch, face-painting, coloring, and a dance party, and met Appalachian's mascot, Yosef! 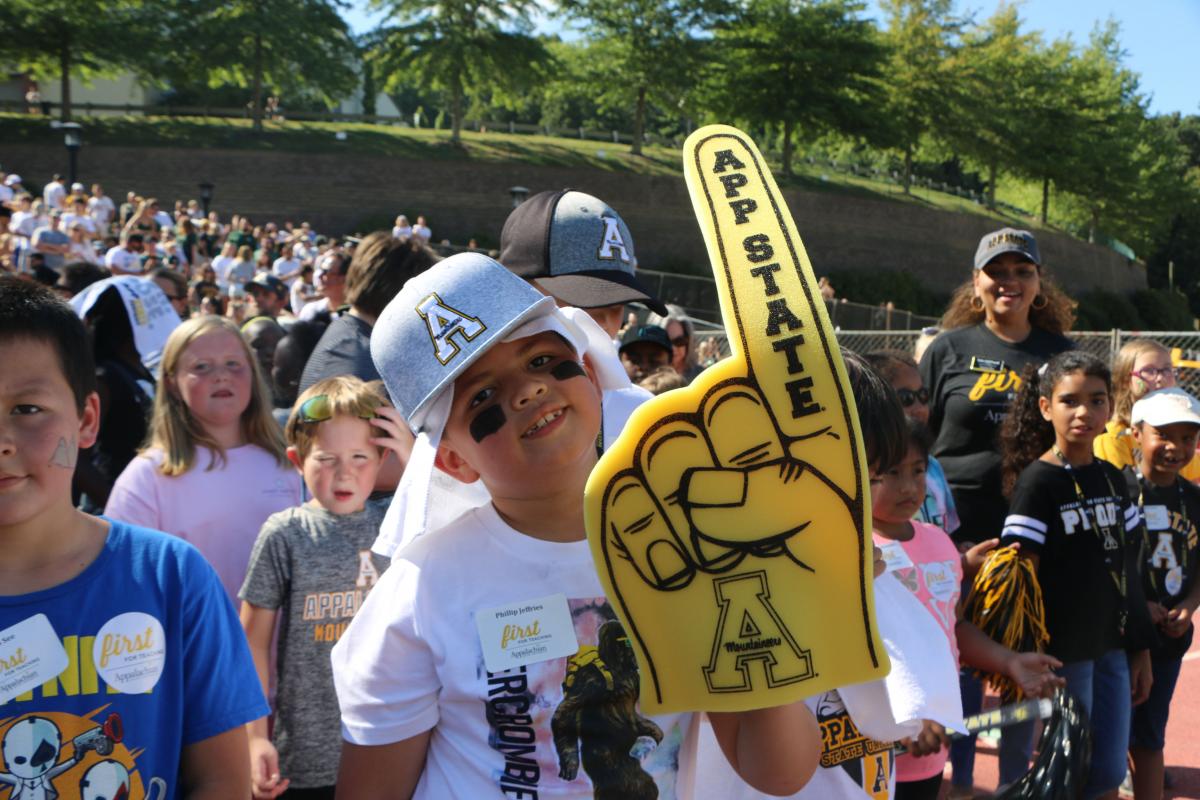 Second grade student and Mountaineer Reader Phillip Jeffries, Jr. shows his Appalachian pride before walking onto the field to be recognized at the Education Day football game. Photo by Rebekah Saylors 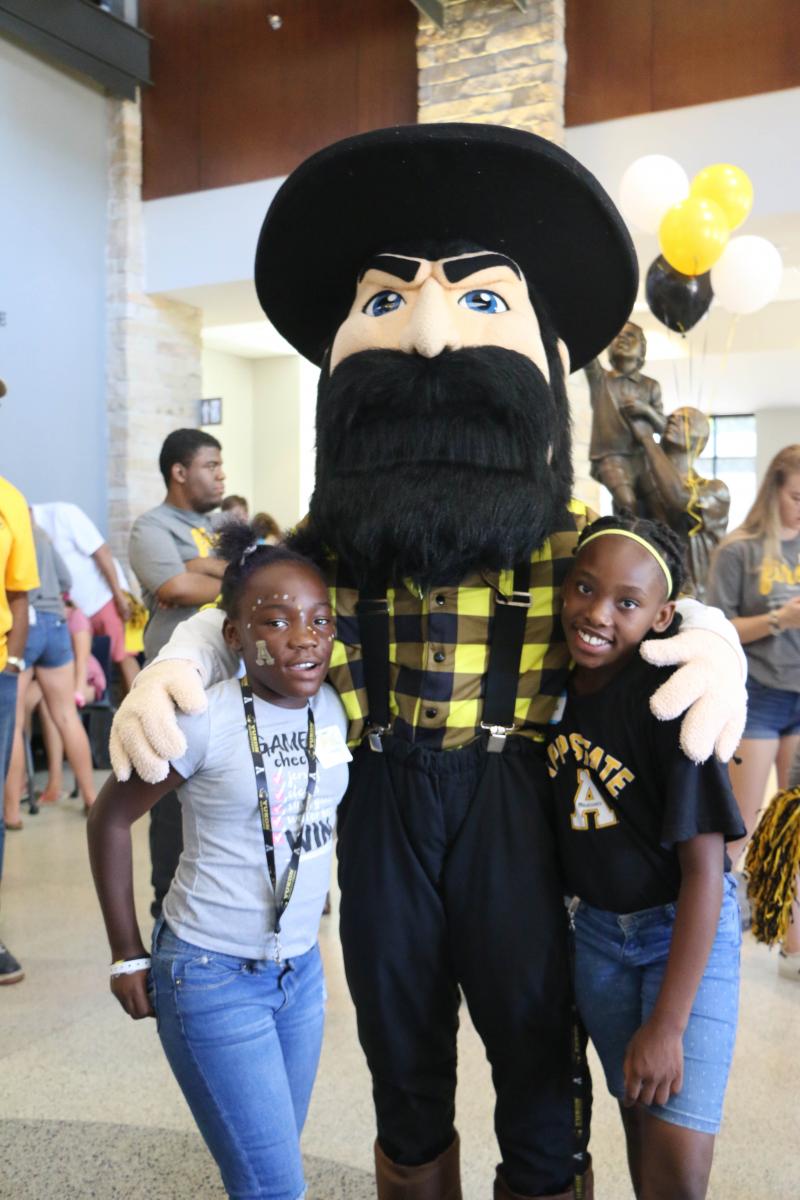 Mountaineer Readers began as a partnership between the RCOE and Appalachian State Athletics with the purpose of promoting and celebrating literacy in surrounding counties. Students from each participating school district who have read the most pages over the summer receive tickets to Appalachian's Education Day football game and tailgate event.

20 Academy students attended with their parents and teachers, and the day was a touchdown for all!

5. The PTO held its first events to support the Academy.

This year, you may have noticed a new addition to the Academy team: our incredible Parent Teacher Organization (PTO). The PTO aims to support the Academy by raising money through fun, family-friendly events. They jumped right into the school year with several events this past month.

Grandparents were invited to the Academy for the first Grandparents Breakfast on Friday, September 6. Families learned about different ways to support the school while enjoying refreshments and each other’s company. It was also an opportunity for Academy staff to continue to build relationships with students and family members. 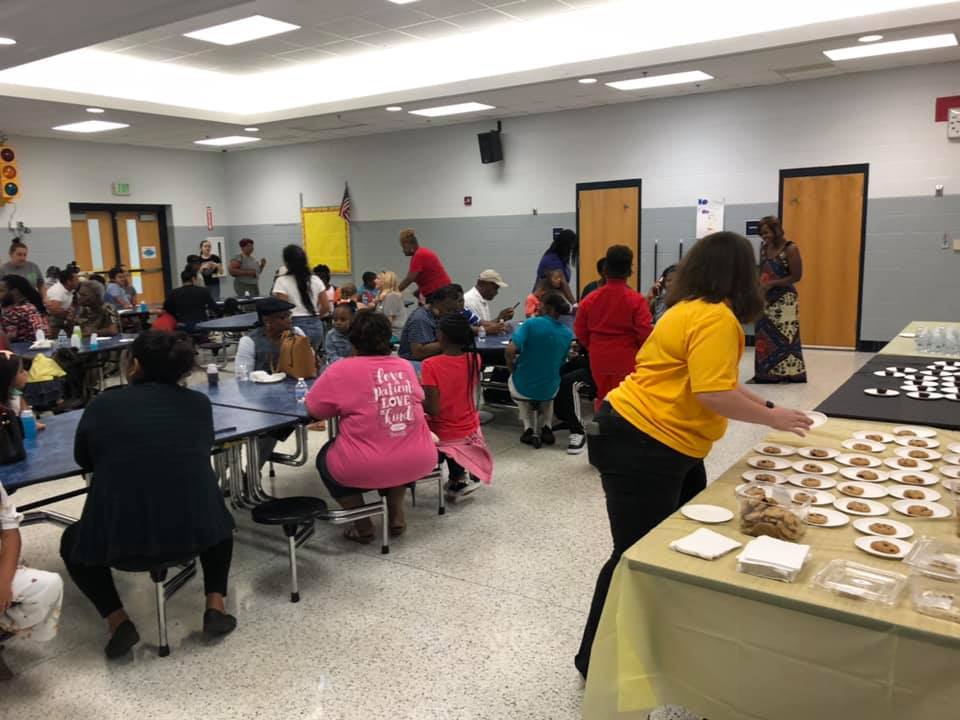 Students and their grandparents and other family members eat together at the PTO’s Grandparents Breakfast. Photo by Amie Snow

On Friday, September 20, the PTO hosted a night under the stars with their first Movie on the Blacktop. Academy students, parents, and staff gathered together to watch "The Secret Life of Pets 2," setting up their own blankets, pillows, and lawn chairs in front of an inflatable projector screen. Concessions, including chips, freshly-popped popcorn, and hand-spun cotton candy, were available for purchase to enjoy during the film. 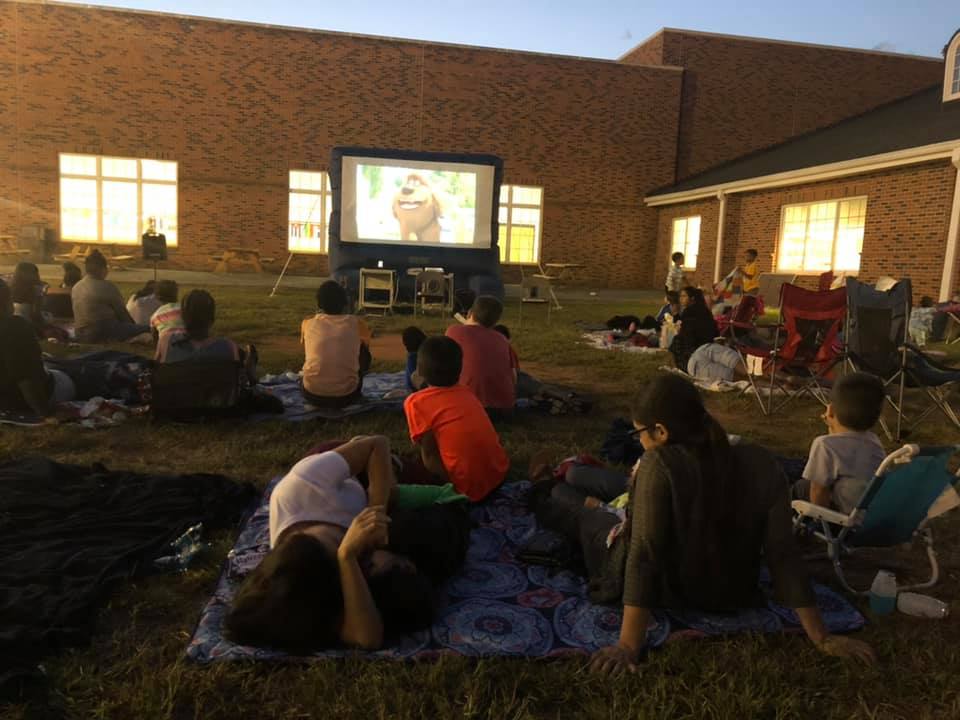 Academy families gather on the blacktop for a movie night under the stars coordinated by the PTO. Photo by Amie Snow

On Friday, September 27, you may have spotted an Academy student or staff member wearing a funky hat. They were participating in Hat Day, another PTO event where students and staff can wear a hat for the whole day for a one dollar donation. This fun and creative fundraiser happens on the fourth Friday of every month.

Interested in joining the PTO? Meetings are held at the Academy on the first Thursday of every month at 3:30 p.m. Look for more information in the Academy's monthly newsletter and get involved! 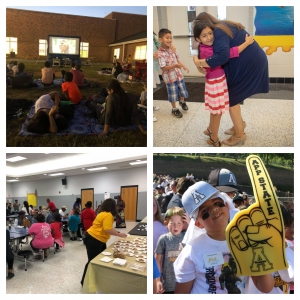 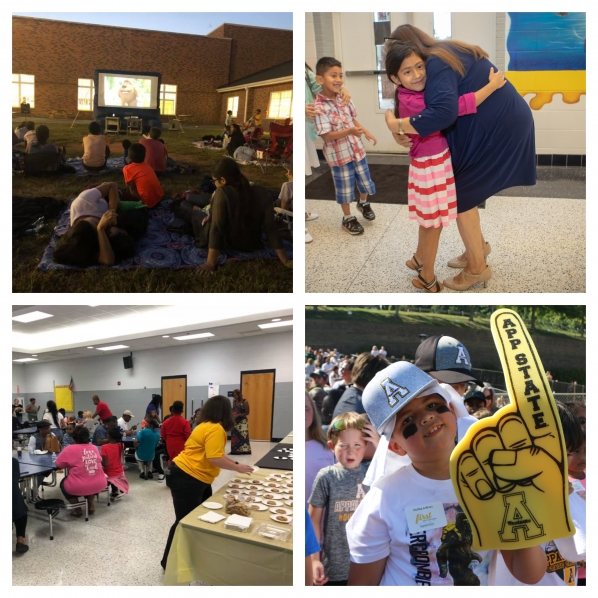